Our final full day in London was spent much the same way as our first and second: walking a lot, eating a lot and seeing some sights. Unless we are at the beach, that pretty much seems to be the formula for the Hayes family vacations. It seems to work for us! While Sean went to a meeting, the kids and I visited the British Museum. Oscar and Sofia had agreed on this musuem ahead of time, I think partially fueled by the recent Night at the Musuem movie which is set in London. The museum is enormous and crammed full of objects and tourists. It was also as hot as a sauna even at 1030 a.m. Although it is free to get into the museum, Oscar insisted that we pay extra to get into one of the special exhibits which was Sunken Cities: Egypt’s Lost Worlds. It was a fascinating look at artifacts from two recently discovered ancient Egyptian cities that had been buried under the sea for over a 1000 years. It was a great call by Oscar. Not such a great call was insisting that we visit both the money and clock exhibits (boring! At least to me and Sofia.) We of course saw the Rosetta Stone and being tourists that we are, we bought a replica magnet at the gift shop.

(Oscar and the Rosette Stone. Sofia refused to pose saying it was tacky.)

After the museum we met up with Sean at the appropriately named Restaurant Oscar in the Charlotte Street Hotel for a delicious lunch. After lunch we decided to give Sofia a treat and went to a couple of the tourist spots in London: Oxford Street, Fortnum and Mason, Hyde Park and a stop outside Buckingham Palace.

After making all those stops, Sean remembered that we weren’t too far away from another one of his favorite pubs so we walked through Green Park to the Grenadier Pub in Belgrave Sqaure. There is some spooky story from the 1800’s about the ghost of a murdered card player who unable to pay his debt and now haunts the pub. (At least I think that’s how the story goes!) As a result, the walls and ceilings are covered in (mostly) dollar bills. We didn’t see any ghosts or leave any dollars bills.

Since we were in the neighborhood, we decided to visit another tourist attraction: Harrods. The kids couldn’t quite understand who actually shopped for their food at the massive and expensively stocked Harrods food hall (I’m not quite sure I do either) but it was fun to look at all the treats. Just to say they bought something, Oscar and Sofia each had a macaron. We then walked a couple of blocks south to the Harvey Nicols department store and went straight upstairs to the Yo! Sushi counter. Sofia loves (vegetarian) sushi and was thrilled with the food and the concept. We had fun grabbing our own plates off the conveyer belt, watching to see what would come around next.

But, the sushi was just an appetizer. We had a reservation at Lurra, a Basque restaurant in Marylebone that our friend Nick had recommended. So, in an attempt to walk off our sushi we headed back through Hyde Park toward the restaurant. It was so brutally hot that day and with nary a tree in sight, Oscar was ready to set up camp in the middle of Hyde Park and call it a day. It was only the promise of seeing Speakers Corner where on Sunday’s Brits can come and publicly speak, air their grievances and start debates that kept him going. He has many grievances to air but, alas, it was Monday. He did, however, stop for a quick pick up game of ping pong in the park before dinner. 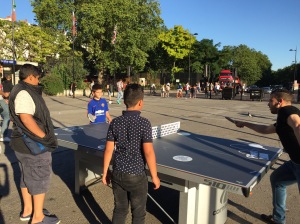 (Ping Pong in the park.)

After a fantastic dinner of giant langostines in garlic sauce and char grilled, aged Galician beef we called it a night.

The next day was one of the those strange travel half days that I loathe. By now I you would think I know myself and my family better.  I should have just booked us on one of those Goldilocks flights: not too early and not too late. Sitting in front of the computer at home, many months away from the last day of vacation it always seems like such a good idea to eek out a few more hours in wherever place we are travelong. But, on that last day, I always find myself annoyed that we are not just going home. I am DONE. We had to check out of the flat at 10 a.m. and leave all of our luggage in the entryway of the flat under the watchful eye of Phil, the building handyman. Sean loaded all our iPads and other important gear into his backpack and we walked back to Primrose Hill, through Regents Park and into Marylebone for lunch at the Grazing Goat pub. Oscar had been begging us for fish and chips during the whole trip and he finally got them. After lunch and two Ubers (one was too small for all our luggage which should be a lesson to me as I pack for Colombia) we went to the airport. We were so tired and hot and done with walking that we got to Heathrow so early they wouldn’t let us check our bags in for our flight. An hour later we cleared security, did a bit of shopping (London snow globe for Sofia), ate some dinner at Wagamama and headed home to New York. It’s been a crazy two weeks. Sean has been away twice and we have hosted guest both weekends. Tomorrow we leave for Bogota!

(Another picture from the top of Primrose Hill. Goodbye London! Hello Bogota!)