The last time I lived abroad was over a decade ago. When we moved to London, Sean and I had no kids (just one very naughty beagle) and were ready to get out of New York and be somewhere different. After studying in Spain in college (why oh why didn’t I keep up with my Spanish?!), I swore to myself that I would live in Europe again. As luck would have it, shortly after we got married, American law firms were looking for lawyers to go to London; so Sean found a firm that would send him and off we went.

We spent the first three weeks covering every inch of London on foot trying to figure out where we wanted to live. We finally settled on Hampstead (and moved the following year a few minutes down the road to Belize Park, hands down my favorite place I have ever lived.) The day after we moved into our damp garden flat, Sean went to work (vacation over!) and it started to rain and kept raining for the next four months. I was alone with no friends, no family, no husband (it felt like that at least, he was working around the clock) and no job. Even though I could understand when people spoke to me it still seemed like I was speaking a different language. I hated the weather, the noisy click clack of the heels of the woman who lived above us, our tiny fridge and riding on the Tube. I didn’t know where to go shopping and was constantly getting lost. I wanted to go home so badly. But, after a few months I found a job, ditched my A to Z Guide, made some friends and the sun came out (at least for a few days) and I now consider those years in London to be some of the best of my life. Once we were back in N.Y., I swore to Sean that we would do it again with our kids. And now we are here.

This experience of living in Lima is completely different because we are only here for six weeks, a glorified vacation really (except for Sean of course), but now, a few days in and I am really remembering those first few months in London. Sean has gone off to work and the kids and I are left on our own attempting to find our way on an unfamiliar continent. We are trying to settle into a routine and the apartment with its stunning views but it’s still not home. It’s damp at night when the fog that sits over the city during the day turns chilly and the kitchen is strange. I miss my things. We have, once again, been walking miles and miles trying to familiarize ourselves with the city and I am so tired at the end of the day. It’s also tiring to be constantly trying to make yourself understood, as I fumble, digging for words lost in my brain. It’s frustrating and makes me want to go back home. But that’s part of the reason we are here.

However, the best thing about this time abroad is that I have constant company, with my favorite people in the world and they make anywhere feel both like home and an adventure. So, we will walk along the Pacific on our way to shop for groceries and eat ice cream, test out the Spanish phrases we learned in class today and marvel at how lucky we are to be somewhere new. 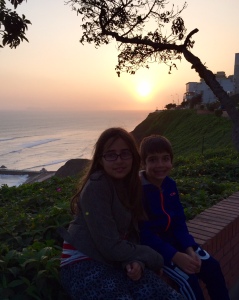 2 thoughts on “From London to Lima”