Today we set out early, at 10 a.m. We walked through the nearly empty streets of Miraflores and grabbed breakfast at a local cafe followed by shopping at the farmer’s market in San Isidro. A lot of products in the markets in Lima (not necessarily at the supermarkets) seem to be local to Peru but there are very few organic products. The Sunday Ecomarket in San Isidro draws a well heeled crowd eager to buy organic fruits and vegetables, quinoa, breads, meat and health products. We bought some bread, goat cheese and vegetables to try later. (I almost bought some kind of charcoal powder from the Amazon that promised to clear my body of all heavy metals. My Spanish isn’t that great so maybe it was actually a laxative so I didn’t buy it.) Of course we made the kids walk back to the apartment, the long way….

After a little rest, some work and a couple of games of the new fan favorite, online Monopoly, we were ready to head back out. We decided to go the La Rosa Nautica Restaurante, the blue and white restaurant on a pier that we can see jutting out into the ocean from our apartment for some drinks and snacks. My new favorite drink, a Chilcano (Pisco, ginger ale and lime):

The restaurant is set smack dab in the middle of the ocean. You can see crabs scampering on the rocks, sea birds eating mussels and surfers fighting the waves. Of course we had to take the obligatory photos with the nautical themed props: 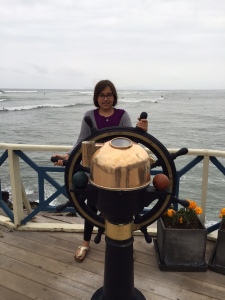 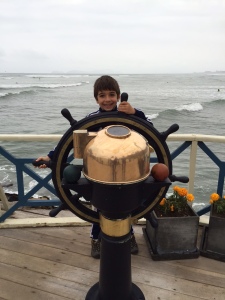 The traffic is unbelievably bad in Lima (especially today when they were having a parade for the upcoming Independence Day.) After about 30 minutes we had to get out of our cab and walk ten minutes back to our apartment so Sean could get on a conference call. Most people in Lima eat a very large, late lunch on Sundays which means that very few restaurants are open in the evening. But, of course we totally messed that up by having a huge late breakfast (typical Americans) and we were too tired to go back out after La Rosa Nautica (to eat or shop) so we ordered pizza. I made Sean order (I have to have some fun. It’s good practice for him!)

Oh yeah, and we watched some fireworks from Sofia’s bedroom window:

It was a pretty good Sunday in Lima!