As soon as we got back from Machu Picchu a couple of weeks ago I started to think about our next trip. Even though we are technically on one long vacation (I know, Sean, not you. Only us, not you!) I felt the familiar panic of having a few days off and nowhere new to go.

I feel like I often divide my life into chunks of time and how they relate to my travels: the itch to go somewhere, the planning of said trip, the anticipation, the trip itself. The despair of being back at home faced with the prospect of nowhere to go. Repeat. Granted there have been some long stretches between each of these stages, especially right after we moved back to the U.S. from London and Sofia was a toddler and we had just bought a house and I was pregnant with Oscar.  (No offense to Sofia, Oscar and the U.S. but it was so boring. And we still traveled more than most people are willing to with a baby and toddler. Itch, itch.)

Back to Peru: Peru celebrates its Independence Day (Fiestas Patrias) on July 27th and 28th which means that starting this weekend nearly everyone goes away. We didn’t know this before we left. The final decision to spend the summer in Lima was made fairly last-minute so we spent most of our time booking tickets, finding an apartment, looking for a language school, packing and sorting out our life at home before leaving. It didn’t leave much time for planning trips within Peru. We figured once we got there (here) we would figure it out. What we didn’t know is how many Peruvians go away during this weekend. At least in Lima it seems like pretty much everyone heads out of town.

The kids and I spent one long, boring afternoon going from travel agent to travel agent (there are a LOT of them here) trying to book something. We really wanted to go to Mancora in Northern Peru where the weather is warmer and the beaches are supposed to be beautiful. Nearly everyone sadly shook their heads at us. We finally found one dodgy looking agency that found (supposedly) THE last hotel room in all of Mancora. It didn’t look that great but the price was right and it was on the beach. So what if we all had to cram into a tiny room that maybe had a disco below it and would have to sit elbow to elbow on the possibly dirty beach with other vacationers. At least we would be AWAY. (Clearly, I was in full panic mode that I was even considering this.) I made the agent hold it for us while I tried to get in touch with Sean.

“Whatever you want to do,” he told me. I didn’t know what I wanted to do, that was why I called him. I wanted him to tell me. He refused. I listed all the pros and cons. I asked the kids. I checked on TripAdvisor (which I have a love/hate relationship with, it’s like that person whose opinion I don’t trust but can’t help but listen to because I have no else to talk to.)

“I’ll come back tomorrow,” I told the guy. But I never did. Instead, I emailed Andres Peña at Aracari Travel who had helped my parents organize our fantastic trip to Machu Picchu. Within minutes he had emailed me back with several options for the weekend.  After several long emails, intense phone calls and one meeting, we nearly booked a trip to the jungle. But, in the end we decided for a closer and more relaxing getaway. Bright and early tomorrow morning with Sean chauffeuring us in a rental car, we leave for Paracas, a town three and half hours south of Lima. Known for its beautiful beaches and wildlife preserves including the Ballestas Islands (jokingly referred to as the poor man’s Galapagos) we are hoping to see some sights, get some sun and relax by the pool at the Hotel Paracas. (Scratch, scratch.)

Hey! Finally a post about what we are doing tomorrow!

Oh yeah, and Oscar got a haircut so he would look spiffy for the trip and on Independence Day: 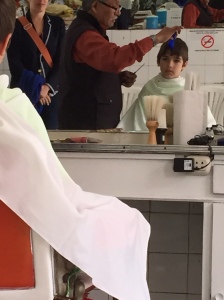