We arrived in London early Saturday morning. Even thought the sun was already shining in Sweden, we needed the alarm to wake us up at 4 am. After only a few hours of sleep, we threw on some clothes and checked out of our hotel in Gothenburg. While I waited with the bags and the kids, Sean conducted some stealth manuveurs to get our car out the garage that didn’t open until 6am. (“You have no idea what I just had to do,” he grimly told me, so I decided not to ask. We are generally not our best traveling selves before dawn without a lot of sleep or coffee.) The ride to the airport was quick and the check-in was easy. I love traveling in and out of Scandanavian airports. The atmosphere is always so calm and civilized. (This is despite seeing an alarming number of people drinking beers at six in the morning en route to their summer holidays in Rhodes and Tenerife.)

It was not quite so calm and civilized upon arriving at Heathrow. (Is it ever?) Our flight landed at the same time as about 67 other flights and we ended up standing in the passport line for over an hour. The kids and I are EU citizens but we decided to wait together as a family with Sean on the non-EU citizens line. Oscar was furious that we were letting Sean and his non-EU passport drag us down. He complained for the better part of the hour. (Along the lines of “what’s the point of having this passport?” and why isn’t Daddy an EU citizen? Long story…) We later found out that Sean could have crashed the EU citizens line with us which made Oscar even more furious. He was so angry that when we got down to the baggage claim area and saw he our four lonely bags going around, he ran full speed and yanked all of the suitcases off the carousel before they disappeared. By the time we took the Heathrow Express to Paddington Station and a taxi to Belize Park we had been traveling for many hours. But, did we rest? No! We did not! We walked to the Tube and went straight to Borough Market in South London.

As any reader (all six of you!) of this blog knows that Sean and I lived in London for nearly five years so we had a lot of places we wanted to revisit. Borough Market was on the top of the list and I thought it would be the perfect place for our first London lunch and some of the spicy, ethnic food I had been craving while we were in Sweden. Sean and I spent many Saturday mornings shopping for food and eating at the small but vibrant and crowded market. We could not believe how much it had expanded. It was packed and about quadruple the size. Brindisa, our favorite Spanish chorizo stand which always had the longest line now has its own building. (And no line, lucky for us. The chorizo, arugula and red pepper on an olive oil soaked ciabatta was as delicious as we had remembered it.)

We also ate tiny new potatoes smothered in raclette, Ehiopian beef tibs, falafel and for Oscar, a skewer of exotic meats: crocodile, zebra and ostrich. Crocodile was the best, he claims. After the Guinea pig in Peru he needed to add some more exotic meats to his list. 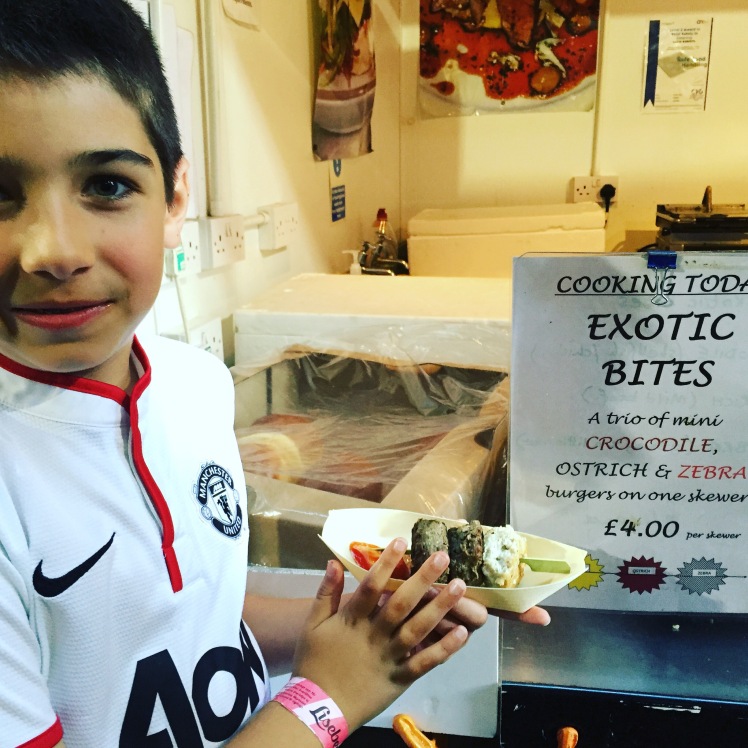 Since we were all exhausted and tired of walking I gamely volunteered to have some oysters and champagne at Wright Brothers Oyster & Porter House across the street from the market so we could all rest.

(Oysters in London with my goofy hat. It was so hot and sunny.)

After that short rest we decided to keep going. After a stop at the Clink Prison Museum (an Oscar request, no surprise there) we walked along the Thames, admiring the view across to the City of London, past the Shakespeare Globe Theater to the Tate Modern. Sean had never been (I’m not quite sure he wanted to go that day either) and the kids expressed some interest and we were right there so we ducked inside for a quick walk around. Housed in an old power plant, the building is magnificent. But it was crowded and we were all completely exhausted. But, we managed to make it to a few floors and see some art before heading back out across the wobbly bridge (formally known as the Millennium Bridge) to the City for a pint at the Blackfriars pub. After, we headed back to the flat for some much needed rest before dinner at one our favorite local restaurants, Artigiano.

I am so glad that we decided to stay in an Airbnb in our old neighborhood instead of a hotel in the center of town. The flat was a very tiny one bedroom around the corner from our old street and it was the perfect choice for this trip.  I loved living in Belsize Park which is in North London near the Hampstead Heath and Primrose Hill. I think it is one of the most charming neighborhoods and it was bittersweet wandering around, remembering our life as it was over a decade ago.

(This little lady who can claim this street as her very first home. She was totally annoyed at me for making her pose. The clogs worked as well in London as they did in Sweden.)