Landing in Panama City after taking off from Lima was like entering Oz: green, green and more green.
The air was warm and humid. The skyscrapers are stacked next to one another hugging the Pacific Ocean. As we drove through the city to our hotel Oscar said it looked like Miami. And parts of it do: more slick and sophisticated and much flashier than Lima. It also feels more American than Lima and many more people speak English here.  Right before we left for Lima in June we found a great deal at the Hotel Bristol though Jetsetter. I don’t know that I would have otherwise picked this hotel because it’s in the business district but the price was right and the hotel is really nice. There was some confusion at the front desk when we were checking in despite my many emails to the hotel. Instead of two connecting rooms we are in two adjoining rooms each with a King size bed which means that Sofia and I are in one room (the big room) and Sean and Oscar are next door (in the small room.) It’s certainly not a big deal but when hotels get small details like that wrong it really bothers me. (Probably because a long time ago and in a galaxy far far away I used to write about, among other things, the business of hotels.) We dumped our stuff in the big room and went for dinner at a restaurant called Maito which features local organic cuisine. The interior was beautiful and the food was delicious. Sean had a crazy spicy cocktail made with Seco, the local rum and essence of ghost peppers. We were all so tired after our day of travel but even with our late bedtime Sean and Oscar made it out bright and early to a marina to buy a couple of fishing rods for our trip to Pedasi. After breakfast we took a taxi to the Casco Viejo neighborhood, Panama City’s old town. Unbeknownst to our taxi driver, one of the main roads leading to this area was closed so we took a circuitous route that took us through the worst slum in Panama City, Chorillo. The neighborhood was where Manuel Noriega grew up. Our driver explained that even he got nervous driving there but there was no other route and since it was daytime on a Sunday he felt we would be OK. We somehow made it out of Chorillo alive (there were lots of police there) and walked around Casco Viejo. This is such a beautiful area of Panama City that apparently had undergone a huge transformation as the old colonial style buildings have been (and are continuing to be, lots of construction!) be restored. We had a great lunch at a small Italian restuarant called L’Osteria then grabbed a taxi to the Panama Canal.

(Glimpse of the skyline from Casco Viejo.) 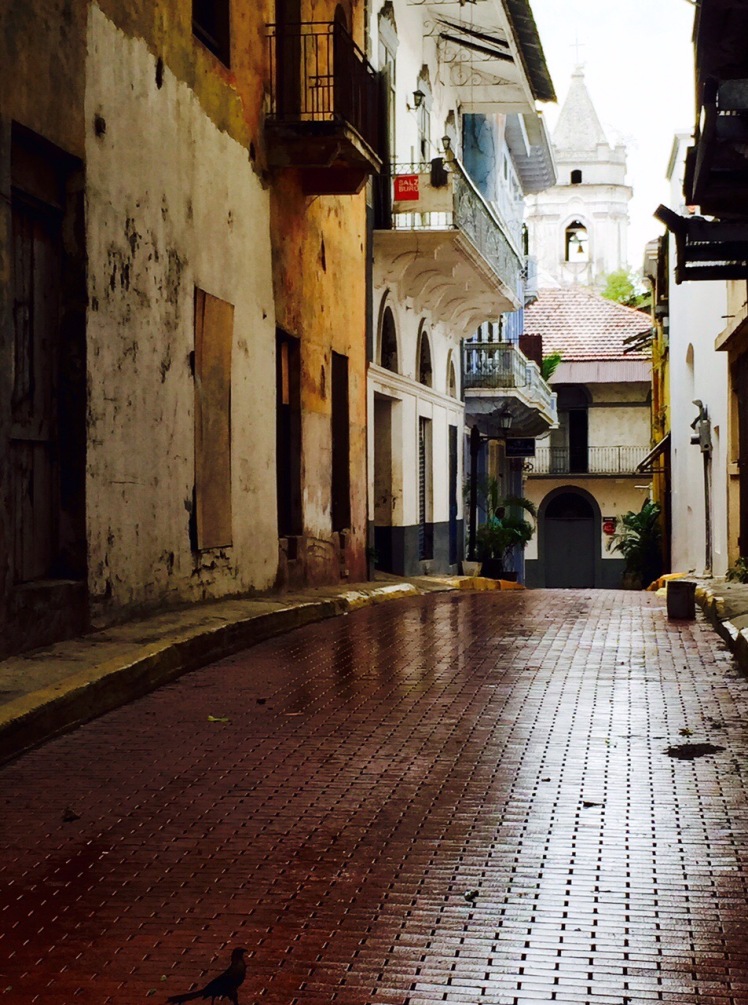 It has long been my dream to visit the Panama Canal and it did not disappoint. We first saw a ten minute 3D movie about the history of the Canal. While we sat in the theater waiting for the movie to start Sean wondered if there were going to be previews for movies about other modern wonders: the Hoover Dam! The Suez Canal! The movie was informative and hilarious in a Simpsons sort of way (including narration by the Panamanian Troy McClure.) We were lucky enough to time our visit for a high traffic period. After fighting with the crowds for a bit we headed up to the restaurant for a drink and a bird’s eye view. It was amazing watching the huge ships make their way through the locks. 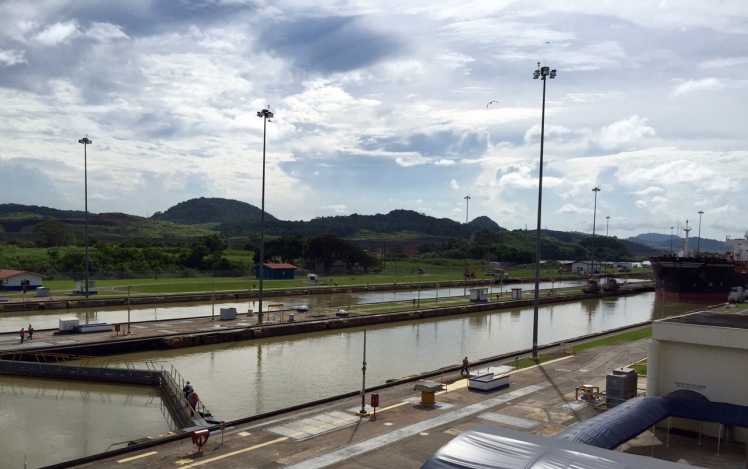 (Ship on its way through then Panama Canal.)

We waved to the men on board wondering where they had come from and where they were going. After watching a few ships we went back to the hotel for a swim and dinner. Tomorrow we will once again attempt to navigate the Pan-America highway, this time to Pedasi.