My in-laws bought their house in Sweden in 2003, the year that Sofia was born. My mother-in-law grew up in Gothenburg and the surrounding area which is over an hour south of the village of Nösund on the island of Orust. Her brother and sister both had summer cottages in this part of the Swedish archipelago but now it’s just my father and mother-in-law.

There’s not much to the town, a former fishing village sitting on Sweden’s west coast. There’s an inn, a place to dock your boat, a tennis court, a few swimming areas and some houses. It’s a blink-and-you’ll-miss-it sort of place but the focus is not on the town but on the water. You can see the North Atlantic and its gang of smooth, gray rocks from most places in town: from the craggy, mossy hills, the dock lined with red and white houses and from my in-law’s house. The rocky terrain in this part of the country is shaped by the glacier that cut through, tens of thousands of years ago and left lots of small islands and rocky outposts in its wake. Bright red climbing roses crawl up the sides of rocks and the white washed fences. Wild flowers dot fields covered by sheep and birch and fir trees line the side of the road. To me, the landscape is quintessential Sweden. But then again, I never really knew Sweden before I met Sean. Although the landscape could not be more different, it still reminds me a lot of my summers in Finland. 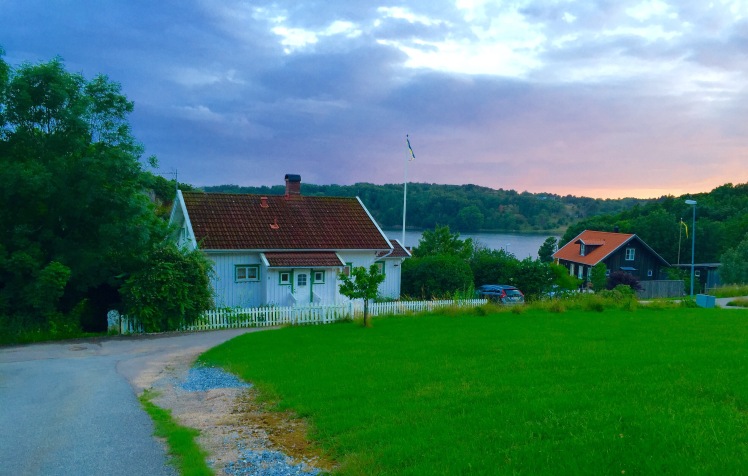 The house is tiny, a jewel box is what they would call it in a real estate listing. It dates from the late 1800’s and was either a fisherman’s house or a sea captain’s home. The style is typical for this part of the country. The outside has white narrow wooden vertical planks, a red tile roof and intricate trimwork on the green shutters and railings. Inside, the walls are thick and the upstairs ceilings are sloped. There at two kakelugns which are tall, round ceramic Swedish stoves that are used to heat the house. Although the house is small it’s well laid out and light and bright.

From the house we can walk into town to look at the boats, fish, play tennis, hang out at the inn or climb on the rocks. The other day we walked along the rocks to one of the swimming spots. Despite the weather being a chilly, but sunny 65 F (at best), we went for a swim in the icy waters. Nervously standing on the high diving board perched on the edge of the rocks, we jumped in and emerged–as my grandmother would say–with our winter cobwebs washed away.