The West Coast of Sweden where Sean’s parents have their house is a popular summer destination. The lure of the ocean breezes (although often chilly), excellent seafood and quaint towns attracts tourists from all over Sweden. We have our favorite places that we like to visit, but this year we went to a couple of new (to me) spots.

One gray, rainy day before Sean arrived, the grandparents, kids and I drove about an hour north to the seaside town of Lysekil to visit the Havets Hus. The tiny aquarium is filled with fish native to the West Coast of Sweden which meant that we saw lots of paper thin flat fish. (They are funny to look at and delicious to eat, especially the red spotted Rödspetta which looks like a fish that you would find in a children’s picture book.) We had a really good lunch overlooking the harbour at the Havsbadet Restaurant. I had a delicious West coast style fish soup which is a slightly creamy, garlicky broth filled with potatoes, fish and shellfish. It’s one of my favorite dishes and theirs was the best version I’ve had so far. The seafood from this part of the county is so sweet and fresh. We can easily eat our weight in shrimp, crab, mussels and crayfish and the fishmonger at the fish market in nearby Stocken is always happy to see us walking through the door.

The weather in Scandinavia during the summer is hit or miss. We spent one memorable summer in Sweden where it rained nine out the ten days but two years ago it was so warm and sunny that we came home so tan that people thought we had spent a few weeks in Spain. I spent many a summer (or should I write, “summer”) day playing cards inside my grandparent’s country house in Finland willing the rain to stop so I could go outside and swim. (Which we eventually did despite the rain and cold because it was summer and you should swim during the summer no matter what the temperature.)

Of course, once Sean arrived the sun came out and hasn’t left. We have been enjoying the kind of idyllic Scandinavian summer weather that the Swedes dream about. We spent one those sunny days visiting the Akvarelle Museum (Nordiska Akvarellemuseet) in Skärhamn looking at their very child friendly exhibit: Disney’s Art of Storytelling. The modern glass structure is perched on the rocks overlooking the water. Sean, the kids and I climbed to the top of the rocks, bracing ourselves against wind and watched the sailboats gliding through the channel then ate salty, plump mussels at the Port Sud Restaurant overlooking the water and rocks. (Well, not all of us. That would be be too good. Sofia had the vegetarian staple, salad and Oscar had Swedish meatballs.) 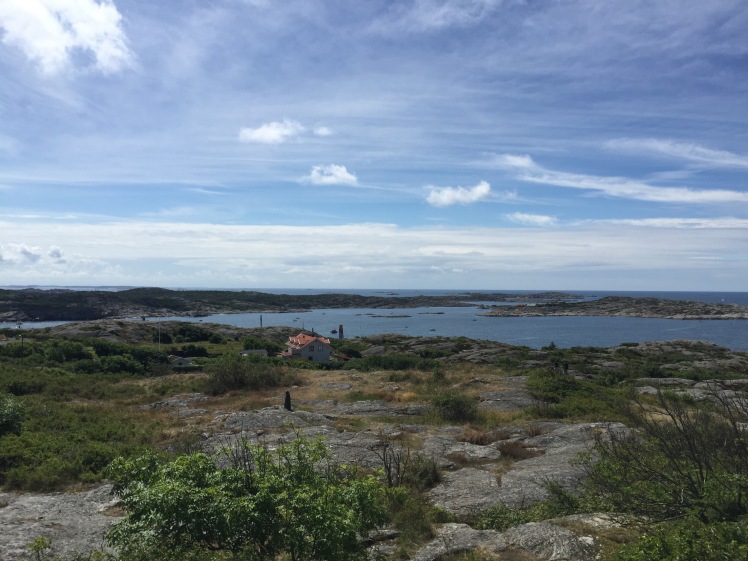 Another day we drove to the island of Marstrand. I’ve wanted to visit for years and I wasn’t disappointed. The posh but quaint island is reached from the mainland by a short ferry ride. Nearly every narrow cobblestone street has a view of the harbour and the houses look like something in a Carl Larsson painting. This is a real sailing town and we were lucky enough to be there when the Match Cup Sweden Race was happening. We climbed to the top of the Carsten’s Fortress and watched the sailboats. We ate fresh fish (and pizza for the non fish eater) at Lasse Majas Krog, a restaurant recommended to us by a local guy who heard us talking on the ferry about where to eat. He told us that his friend, a fisherman, owned a restaurant so of course we had to go.

We spent another sunny day jumping into the ocean from the rocks. Oscar was the bravest of us all and jumped from the very highest diving board which is 15 feet high. We lunched high on the rocks at Bryggiven in Lyr, a restaurant on an island accessed only by ferry, played some competitive family tennis, caught a fish from the dock (a mackerel caught by Oscar), warmed ourselves in the Nösund sauna and finished it all off with a seafood feast. 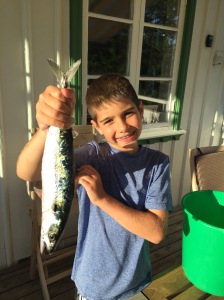