Hi, it’s Sofia and Oscar! We decided to give Mama a break from all the blogging and tell you about the Gaston Acurio restaurants we have gone to. For those of you who don’t know who he is, he has 45 restaurants, mostly in Peru. He is Peru’s most famous chef. He and his wife, Astrid, work together to make their fabulous restaurants. Their first restaurant, Astrid y Gaston was number 14 on the list of the world’s best restaurants. We went there with our grandparents when they came to visit us. Their restaurants are both fancy and what they call in Peru “fine casual” (our dad told us this.)

We have been to: Tanta, Astrid & Gaston, Papacho’s, Madame Tusan’s, Panchita’s and La Mar. Tanta is delicious traditional, causal Peruvian food. Papacho’s is a fantastic burger restaurant, Madame Tusan’s is Chifa which is what Peruvians call Chinese food. Panchita’s is a modern take on Peruvian food. Astrid y Gaston is the fanciest. One part of Astrid & Gaston has a 28 course tasting menu but the part we went to is called La Barra and you can order off a regular menu. (This is where Oscar tasted cuy–guinea pig–for the first time.) La Mar is a lunch-only Peruvian seafood restaurant (a cebicheria.)

Today we had lunch at La Mar. The manager at the restaurant, Pepe, set up a special menu for us. We had traditional ceviche with a fish called cabrilla and Sofia had a vegetarian ceviche made with mushrooms, tomato, onions and sweet potato and best of all the marinade called leche de tigre. Then, we had sea urchin ceviche which Oscar didn’t try (neither did Sofia!) and Mama and Daddy didn’t like it either. After that, we had tiradito made with a fish called perrey which is kind of like a sardine but it was better. It was Oscar’s favorite dish. Then, we had a tuna tiradito covered in a ginger sauce and sprinkled with scallions and sesame seeds. Sofia actually tasted this dish and loved it! 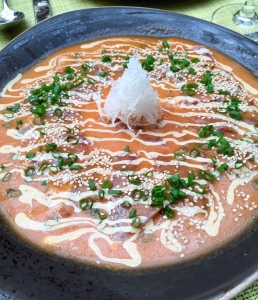 Then, we had causas. A causa is a common dish in Peru made with cold mashed potatoes and topped with different things like seafood or chicken salad or shrimp. Then we had broiled scallops and clams in the shell. Mama was really excited that there were clams because she loves them. Sofia ate a scallop! After that, we had a whole fish called a Diablo. What they did is they fried up the pieces of fish and breaded it and put it back in the fish. Sofia even tried a piece of the cheek. Oscar and Daddy ate almost all of the other cheek. 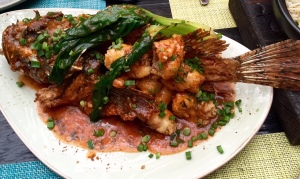 Finally, for dessert we had a cacao chocolate mousse with sesame seeds on top and picarones (like doughnuts) that were made of pumpkin, sweet potato and anise with a special honey dipping sauce. We were all really full after all those courses. Mama made us all walk home.

At La Barra, all the food is family style and we had just been sick so we only shared a couple of plates. Oscar tried cuy for the first time which he loved and the rest of us had a mixture of meat and fish dishes. The restaurant was so cool inside. It had potted plants hanging upside down from the ceiling (we think Nana might try to do this in her living room!) Papacho’s is a delicious burger restaurant (they have a few) and has all kinds of burgers and side dishes. Mama, Daddy and Oscar had burgers and Sofia had mac and cheese. We started with a delicious crudite plate called Peace & Love which was raw vegetables with different dipping sauces. The interior was very nice and welcoming. The Tanta we went to was at Larcomar (there a couple of different locations.) This was the first restaurant we ate at in Peru. They have delicious juices and Oscar had a type of lomo saltado (with noodles) for the first time. Sofia had a delicious parmesan and artichoke ravioli. At Madame Tusan’s we had Chinese food sort of the same that you would find in New York. (We think it might be better in New York!) At Panchita’s luckily (for Sofia) there was a delicious salad bar. Oscar had cuy again and Daddy had a delicious version of lomo saltado which was served over rice with an egg on top. Mama had swordfish.

We thought that the Gaston Acurio restaurants were really delicious!

One thought on “Gaston Acurio’s Restaurants”